Happy Sunday to everyone!

I hope this post finds you well.  I've had a few folks ask about my 5E Campaign.  We were able to get in about 13 sessions before the real world caught up with us.  Job changes and general work hectic stuff, folks got married, illnesses, etc... The player's characters had made 5th level. Unfortunately we didn't get to end the campaign on a note of completion, but we had some great experiences.  I guess this is sort of a lessons learned post campaign wrap up sort of thing.

Session Zero: I think this really helped the campaign.  I intend to do this next time I start up a new campaign.

5E:  While not perfect, the system has grown on me.  I consider myself an OSR, old school DM, but I was able to run 5E with an old school approach (for the most part). 5th level hit some significant milestones, and the characters were pretty tough compared to what I had expected.  They trounced some of my encounters in the last session.  I will say with 5E, I can "throw" a lot more monsters and foes at the party than say in an OSE or C&C game.

Milestone Leveling: this was another new approach for me, and I think it met the needs of the group. I may not do this every campaign, but it was nice method for this campaign. 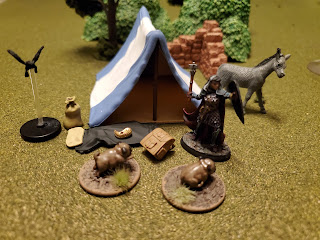 So what's next?  We have discussed starting up a new campaign after the first of the year. Hopefully by then things will have calmed down for everyone and we can resume some sort of play.

None of us are interested in D&D One or 6E or whatever it is, sounds like it has a significant virtual component and I don't enjoy virtual play.  We have talked about a new 5E campaign, but are reviewing options.  Currently I find myself interested in some Sci Fi, I've GM'd a TON of fantasy over the years, and a good bit of P.A. (Gamma World!!!), but very little Sci Fi RPGing. I ran one Stars Without Number campaign that ended with a TPK after 4 sessions. I did run some classic Traveller in high school/college, but that was a LOOOONG time ago.

Well thanks for reading and Good Gaming!  -B.B.