We played session 5 of our 5E Campaign. 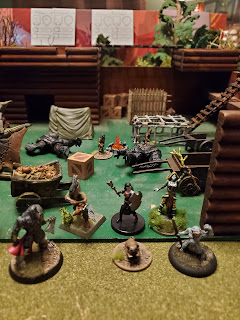 The party finished up taking out the Hobgoblins at the Fort, along with the Carnivorous Ape guardians. Freed a bunch of captives, and got a bit of loot.  The Hobgoblin warlord escaped through a secret door, a battle for another day.

This session had a good bit of logistics, exploration and planning.  The party had dealt with the hobgoblins as a job for Melvin, of Melvin's Marvelous Menagerie.  Completing the mission, he gifted them with some more intel, healing potions, two war pugs and a Silver Raven figurine of Woundrous Power (Sally loves Ravens). The party tied up some other loose ends then made their way to make the journey through the mountain pass to the wildlands beyond.

Instead of taking the main pass, Orreg the Goliath found a "goat trail" and with the aid of some potions of climbing (loot from the hobgoblin fort) they made their way. They had heard goblins guarded the pass, so wanted to avoid them.  The goat trail followed above the pass for awhile. Hours in they looked below and spotted several dead goblins below?  From the distance they looked dead and bloodless?? What could have done that?  Continuing to work their way along the trail they found an older more worked path and eventually uncovered some ruins along the cliffside.  Finding a cave of worked stone, the party entered, engaged in a fight with Ogre zombie guardians, the party fairly easily defeated the undead through the use of sound tactics and skillfull spell work.  Exploring further, they realized they were in a lost shrine to evil gods best forgotten, venturing down a darkened hole, they found a altar with an obsidian bowl.  Aldebaran carefully scanned the altar...however, once Sally, the cleric of the Raven Queen entered the chamber, the foul thing lurking in the altar bowl manifested and attacked! 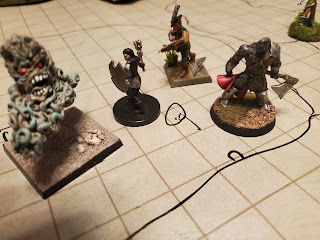 This was a tough fight, half the party was still in the chamber above, Meego the monkey, was too terrified to even face the monster, Sally was quickly immobilized, her war pugs terrified of the thing hid in her packpack, Orreg dropped into the chamber and was quickly also paralyzed with fear by the demon.  The party barely survived the fight with the foul demon thing, Aldebaran realizing destroying the bowl would send the beast back to the abyss.  Aldebaran in the last moments of the fight was smashed against a wall, even failed a death save. The party survived, Aldebaran was saved, but the destruction of the demon's "bowl" caused the chamber to collapse, during the collapse Aldebaran glimpsed a passage below the altar...reluctantly he was hauled out of the collapsing chamber, cursing..."that's where the treasure is! We defeated that thing, but can't get to the treasure.."..