Hawk the Slayer and an Ode to Old School D&D

I recently got to re-watch an old favorite movie of mine. A movie that some have labeled as the best D&D Movie ever!

I'm talking about Hawk the Slayer! 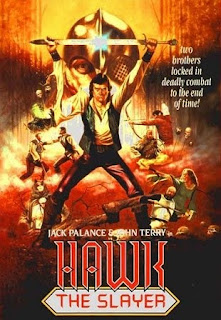 I still remember the 11 year old me that was blown away by this movie when it released back in 1980. Yes, I am that old.  Anyways, watching it again, was a breath of fresh air.  With all the difficulties of 2020, it was nice to be taken back to the 1980s of my youth. I know the world was far from perfect back then, but with time you gloss over the bad and remember the good stuff. The cheesiness of this movie hit all the right spots for me, and also helped me remember the old school D&D of my youth.  Orcs were for fighting, dungeons were for exploring and dragons were for...well mostly running away from, this was basic D&D after all!

I've recently been enjoying reading posts by Needles over on the Swords & Stitchery blog, his OSR Moorcockian Frankenstein Campaign loosely based upon the Black Blade of the Demon Demon King has really sparked my interest.  This is exactly the kind of wildly cool and crazy campaign I'd love to play in and run, and bits of his posts reminded me of how my group used to play back in the day, and for some reason have gotten away from in recent years.  We combined fantasy and sci fi without any concerns. I'd read some comic book that gave me an idea and I would plug it into my campaign. I'd get a recent issue of Dragon Magazine (IN THE MAIL) and would loot it heavily for content to add to my games.  The first D&D book I ever purchased was Deities and Demigods, which had the Cthulhu and Melnibonean Mythos in it. 10 year old me, just took for granted that Arthurian Knights with their Native American Allies were supposed to be fighting Mi-Go and the minions of Set.  It formed the foundation of my DM style for years to come.

So moving forward I'd like to try harder to get back to that style of play and gaming. Needles has been doing it all along, and I know with the right group, I can too.  With the release of  Old School Essentials  I have the mechanical tool kit to run the style of games I want, and with the OSR library I now have, I can Frankenstein the heck out of it, to my hearts content.

With that said, I've backed a couple of recent kickstarters that I am looking forward to playing/running in this vein. 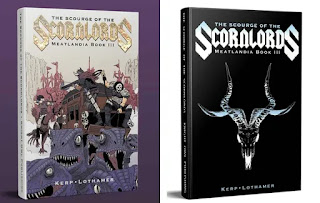 Scourge of the Scorn Lords a "post-apocalyptic fantasy wastelands, psionics, AND madness-inducing monstrosities!", OSE based setting that sounds right up my alley! 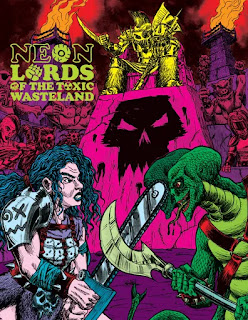 Neon Lords of the Toxic Wasteland an "Ultra-Violent and style matters RPG set in the ruins of Earth, after the Neon Wars of 1992. Half Fantasy half SCI-FI ALL RADNESS" So a OSE Gonzo PA setting, how can I not be all over this one! The pay what you want version of the rules can be found HERE

Hopefully 2021 will be better than 2020, and with the vaccine roll out, we can all get back to having more normal lives, which will hopefully include face to face gaming again. I know online gaming is an option, but I prefer face to face. Both of these games seem like loads of fun, and heck with the OSR, I could even mash them together if I wanted too, in classic Needles Swords & Stitchery Frankenstein style!

Oh and yeah Dr. Steele will definitely be making an appearance(s)!

So, in order to make this post more than just an old grognard rambling about the good old days, and a commercial for upcoming OSR products, how about some actual gaming content? Since I started this post off talking about Hawk the Slayer, how about I stat up the Jack Palance villain Voltan the Dark for the OSR?  First set of stats are for FH&W, since that is what Needles is currently using for his Black Blade of the Demon King campaign . FH&W is an awesome comprehensive OSR product that doesn't get enough love. I've discussed FH&W briefly over the years, but need to revisit it in a future post. 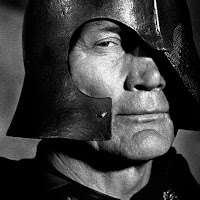 Other Aliases: Dark One, The Devil’s Agent, Servant of evil.

Voltan is a power hungry, selfish tyrannical individual that feels a narcissistic sense of ownership over everything and everyone around him. He feels any downturns he experiences are caused by the actions of others and never as a result of his own doing. He especially relishes goading and tormenting his captives before eventually growing bored with them and murdering them. If he is short on captives, he may kill a member of his camp just to keep his men "on their toes".

Voltan has a mobile military camp of mercenary soldiers, their numbers vary between 60-100 on any given week. He has been known to kill his underlings on occasion to display his power, or if he is just pissed off in general.  These men epitomize the meaning of the word scum. They are vile, murderous thugs that enjoy murdering innocents just to hear them scream. They prefer unfair fights, and in the face of strong resistance, especially if Voltan isn't around, they may flee.  Disadvantage on morale checks when half their number are taken out and Voltan is not present. Generally they are equipped with Leather armor, sword and dagger,  although a handful (1 in 10) also bear crossbows and a small number  (2 out of every 10 or so) wear chainmail armor.  They have enough light horses on hand to keep them mobile, but they are not effective horseback combatants.

Background: Villain - +4 bonus to rolls wherein his villainous background would be relevant (not applicable to attack rolls).

Int 13 +1 to knowledge checks, saves against illusions and politician's lies

Cha 16 +2 (strong force of will, especially over the selfish and weak-minded) (disadvantage on Charisma checks when his helmet is off and his horrible facial burn is visible)

Talents:  Intimidation (+4 when threatening force or bullying beings with 5 HD or less) , Combat Reflexes (never hesitates in combat, +1 to surprise and initiative rolls), Ruthless (Cleave, when he drops an opponent with an attack, he gets an immediate attack against another foe in range).

Other gear as needed including a maximum hit points black riding horse. 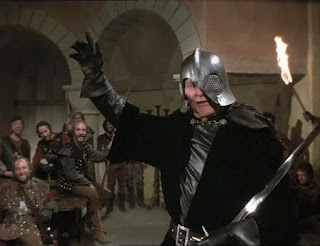 PRO 16 +2 attack and damage with missiles, +2 AC, uses daggers to maim at distance, prefers to kill up close and personal

END 9 (was higher, but his facial burn and sorcerous treatments have weakened his endurance over the years)

Sleaze 16  He is a villain and hangs out with despicable thugs, said to be an Agent of the Devil

Fortune 5, he has pushed himself to attain his goals.

Rad Abilities: If it Bleeds, Its Too Dangerous to Go Alone, True Masters of the Quest, The Thrill of the Kill,

Weapons & Gear: Rucksack, Slasher - Long Sword (1d8 damage) , Dagger (1d4 damage), Leather Armor +2,(you can Metal up his gear if you want, this gear is more in tune with his character as seen in the movie).