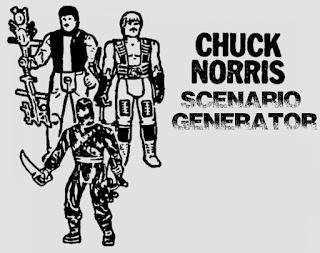 
So making some random rolls let's see what we get..
2 Locations, rolled a 17 for a Back Alley and a 3 for a Casino..so this will be an urban adventure
The Key mission is a 3... to defeat a Foe..rolling to determine the foe I rolled an 11...Assassins!
For potential friends and allies I rolled a7 for an Old Mercenary Friend...
under additional story elements I got a 9 Cobra Venom!!  Cause you know Chuck Norris was once bitten by a Cobra and five excruciating days later the cobra died!  : )
Anyway this looks like assassins are working out of the Casino, killing targets in back alleys across the city. Our player(s) are brought in to deal with the issue, an old mercenary buddy provides some intel on the location and may even help with the final fight. But then in the final battle it is learned the master assassin is a master of Cobra Venom Style Martial Arts! Will our heroes prevail!!  : )
Posted by Brutorz Bill at 6:09 PM