A while back I posted about the upcoming Pathfinder Worldscape comic series. Well the first issue came out this week and I was able to sit down and read it tonight. 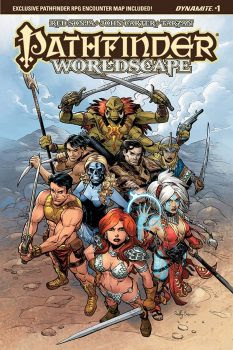 I really enjoyed the first issue. My only complaint is that when I got to the end of the issue, I wanted more! Even if you are not into Pathfinder, I think there is some great stuff in here for anyone who is a fan of Swords & Sorcery, Pulp type adventures. I won't give away any spoilers but I will definitely be using ideas from this series in my own games. I really like the world-setting they are creating and I can see myself running adventures in such a setting. Some Pathfinder RPG stats are including (Red Sonja!!), but I can also see myself using the setting with many OSR rules systems (Fantastic Heroes & Witchery and AS&SH immediately come to mind). Also don't forget the 2nd edition Kickstarter for Astonishing Swordsmen & Sorcerers of Hyperborea starts tomorrow!! Anyways, I hope everyone is having a good week, and I hope you are able to squeeze in some gaming this weekend!
Later-B.B.
Posted by Brutorz Bill at 7:35 PM