Crugs an Alien Race for Machinations of the Space Princess 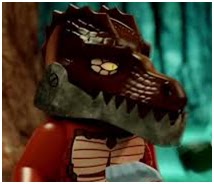 CRUGs
Crugs are crocodilian humanoid aliens native to the swampworld Nastus Prime. They are rather dimwitted but make decent minions (i.e. thugs) for the more savage overlords and crime bosses throughout the galaxy; savage because Crugs have been known to eat their victims... They average 6-7' tall and are covered in tough brown scales. They have large crocodilian jaws that they often augment with a cybernetic lower jaw. There are no known Crug Psions.

Crugs have the Adaptable trait once, giving them one bonus Skill Point (this point is often spent on learning to pilot their various swamp craft).
Natural Weapons- Carnivore Jaws d4 damage (those that have Cyber Lower Jaws (the vast majority found offworld) lose their swimming faster ability but do d6 damage with their jaws)


Crug's prefer to operate in and around swampy areas, when found in such environments they almost always have their Swamp Jets with them. They love to zip about the waterline raising hell and using hit and run tactics to raid any communities in the area.
Crug Swamp Jet
Aquatic Personal Transport
Crew: 1
Attack: +3
Scale: 1
Hit Points: 13
Armour: 0
Defence: 11
Speed: Fast
Weapons: None
Toughness Save: 5
Reflexes Save: 8
Power Save: 5