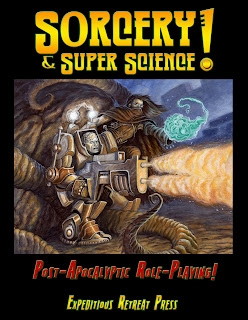 Looks like there are more and more Post Apocalyptic RPG's coming out these days. I just stumbled across this today to be put out by Expeditious Retreat Press (they've done some good stuff in the past so I'm hopeful).  I have no idea what mechanic it will be using.  Here's the blurb about it:

"After the cracking of the moon and before the rise of Atlantis the world was a place strange to the thoughts of honest men. The death throes of science amid the birth of magic sculpted new generations of conquerors who strode the lands forging civilizations of steel, sinew, and sorcery from the decrepit hulks of the ones that fell before. Tyrannical wizards, amoral super-scientists, charismatic catalysts, and multifarious mutants battled for wealth, power, and honor. It was ten thousand years of barbarity; ten thousand years spent in the shadowy shells of past glories, hiding from horrible creatures that scratched and skittered for blood; ten thousand years of tyranny and injustice, ten thousand years of Sorcery & Super Science!"

I'm also pleased to have learned that the Darwin's World Savage Worlds conversion is still a go, no release date yet, but I've been looking forward to this coming out for awhile. Darwin's World is a great game, the second edition was done up for D20 Modern and is very well done.  I've just found myself shifting to more simplified game systems these days. Plus many of my gaming buds are into Savage Worlds.  Now if we could just get a new edition of Savage Worlds : Hell on Earth! 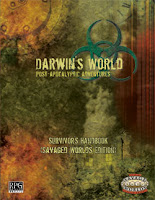 I'm also privy to some other upcoming P.A. RPG releases from some other folks (Not-Savage Worlds related), can't say anything right now, but some more good stuff is a coming!  ; )