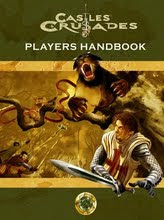 Well I had to work yesterday even though it was my "day off", so as a reward to myself I stopped at the FLGS on my way home.  At first I didn't see much that caught my eye, but then I spied the latest printing (4th) of the Castles & Crusades Players Handbook.  The irony is that just the day before my wife had commented on how much she had enjoyed playing C&C in the past and hoped at some point we'd play it again, due to her work/school schedule she has taken a break from regular gaming.  Readers of my blog might recall that I ran a C&C Campaign a couple of years ago. I thought it interesting that she had fond memories of the Campaign, especially since that Campaign had a higher PC death toll than any other Campaign I've ran.  She had lost two characters herself in that meatgrinder, although both deaths were caused by another players actions/inactions.  Anyways back to the present, looking at the latest edition I noticed they had completely redone the barbarian (the version from earlier editions was pretty weak compared to the other classes) and they had added a ton of new spells for the illusionist (another much needed addition).  So taking it as a sign I picked up the book, the fact that it was 20% off didn't hurt either!  Going over to the Troll Lord Games site I realized that there is another book out I didn't know about Of Gods and Monsters, by Jim Ward!  I may have to pick that one up as well, I loved the work he did on the original Deities & Demigods for AD&D back in the day.  They also indicate the long awaited Castle Keepers Guide is still being worked on.  Too be honest I gave up waiting on the CKG quite some time ago and when we moved on to try out other games (M&M, 4E, Pathfinder) I stopped being concerned about it.  I do hope the CKG does see print soon, but having it is not required to enjoy playing C&C. Well anyways got to get ready for our Pathfinder game later today.  I'm not planning on quitting Pathfinder for C&C anytime soon but having a gamer wife that's interested in playing C&C again sometime is something that has definately got my attention.