Digging into the discount comics bin

Like most folks I'm having to watch my budget closely these days, and as a result my gaming purchases have taken a serious hit of late.  I still go to the "local" comic/game shop when I can (the only one left in town now), they recently put out several big boxes of old comics for 25 cents a piece! Woo Hoo!  I found several cool looking comics, I'll be talking about more of them later, but one that gave me some surprising fodder for gaming was this one. Warheads, its a Marvel UK short lived series from the '90s. 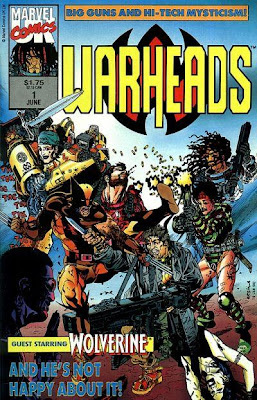 The plot is perfect for an RPG Campaign.  The Warheads are mercenaries working for a secretive group known as MYS-TECH.  This powerful multinational (planar?) corporation has found the secret of accessing and somewhat controlling wormholes via techno-magic and sends these mercenaries through portals to other worlds/dimensions/times to steal alien tech and artifacts for the company to use for some serious profit, supposedly the mercs get a percentage of the cut, but the characters receive limited training and die off pretty regularly, 3 died in the first issue alone. Sounds pretty OSR doesn't it! "Oh Sh*t Run!"
There's more to it but that in and of itself sounded pretty darn cool to me.
Seems like a great way to put together a mix of different characters, all low-level with a reason for being together and going out to get their butts kicked. Throw in some guns, alien tech, magic, monsters and you've got the makings of a fun campaign!
Now to decide on the mechanic? I first thought maybe Stars Without Number which could work fine, and has a nice Psionics System, I considered Terminal Space (and that would definately be cool) but for some reason and folks may think I'm crazy for this, I'm thinking about using the X-plorers RPG!  I mean the basic premise behind X-plorers is your a team of Troubleshooters sent out to "Fix" stuff.  Heh heh heh.
Anyways just thought I'd share my rambling thoughts.  Needless to say I was quite please with my .25 cent purchase.
Posted by Brutorz Bill at 7:04 PM