With AS&SH still on my mind, I went with the wife to Target. Of course, I had to browse the toy section, I mean I do have a grandson, not that I need an excuse. ; )

I spotted a Marvel Comics Wild Child action figure on the shelf and that got me to thinking...dangerous I know.  Trey over on the Sorcerers Skull blog has been posting about comics for a bit, and I realized how much of a significant influence comics have had on my RPG game .  For our upcoming campaign I want to get back to that model.  So after I got home, I sat down to work up a version of Wild Child for my upcoming AS&SH Campaign. 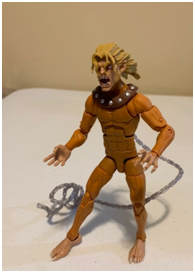 Wild Child is more of a secondary character in the Marvel Comics, this figure ties into the Age of Apocalypse storyline wherein he was nearly feral, of low intellect and had limited ability to communicate verbally, plus he was prone to berserk rages. Sabretooth kept him in check on a chain leash to keep him from harming his teammates. ...So when I saw the figure, I thought...ok how do I work him up for AS&SH?  It turned out to be much easier than I thought. 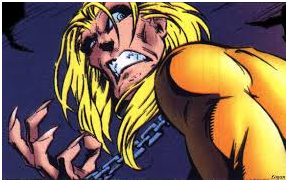 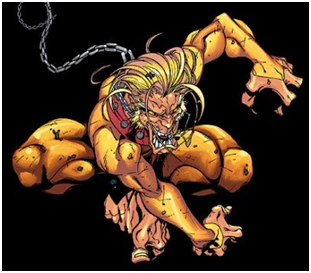 Shields Allowed: Any (but won't use one)

For my AS&SH campaign-

Wildchild was said to have been raised by wolves  and his behavior certainly supports that.  Found as a child by a group of adventurers he was sold to a slaver and wound up in Xambaala. Since then he has been raised and used by the mercenary enforcer Drago as...well as an attack dog!  Wildchild responds to Drago's commands, more or less, but when the rage is upon him, even Drago has difficulty controlling him, hence the leash.  Once per day, Drago can use his speak with animals ability to command Wildchild to stop an attack while he is enraged, Wildchild has a 1 in 12 chance of continuing to fight for 1d6 rounds even after this command is issued.  My initial post had Dr Steel (Drago) as 4th level, for my campaign I have upped Drago's level to 5th, since I felt he needed that extra level of oomph to better handle Wildchild.

If you want to go with the truly feral more Marvel Comics aspect of Wild Child, raise his level to 7, which is where he gets the berserker bestial form ability.  I wanted to introduce him in my campaign at a lower level, so I went with  a level 3 version.

WildChild is copyright Marvel Comics, no copyright infringement is intended 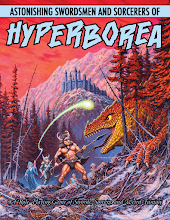