Gaming Reflections with some New & Old (but new to me) Sci Fi RPG Goodies! 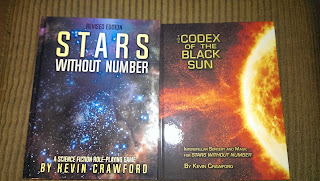 Due to some truly sad stuff my gaming group is no more.  It just didn't feel right to continue after what happened.  I spent the holidays and surrounding weeks taking a break from gaming, and just reflecting on life and things.  My friend and I had been working up a joint 5E game, with his passing, I just don't even want to look at my notes about it. Maybe one day I will return to what we were working on.  I do however, find myself in the mood to game again, I decided I wanted to do something new and different.  With the gaming group dissolved, I have started a new quest to rebuild/create a new gaming group and to play something different from what I have done in the past. I've played and DM'd a ton of fantasy over the years and a lot of P.A. gaming, but my experiences with GMing Sci Fi has been limited ( a bit of Traveller in High School, does Rifts count as Sci Fi??) So I am looking at the Revised Edition of Stars Without Number. I posted a good bit about Stars Without Number (original version) several years ago. But other than one game at a con I never got a chance to GM a session. With some Christmas money I purchased the hardcover rules for SWN and the new Codex of the Black Sun, which gives you the option of tossing some magic into your Sci Fi.   I had wanted to give Starfinder a try, but goodness that is way to much crunch for my schedule these days.  The new books are sweet!  I'm digging into the core rules and then will delve into Codex of the Black Sun. 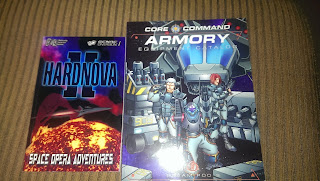 I also recently picked up Hard Nova II and Core Command Armory book for an unbelievably great price.  I will likely see if I can adapt some things from both HN II and CC Armory to use in my hopefully upcoming SWN Campaign.  Hard Nova II seems to be a rules lite system and Core Command has conversion rules to 3.0 OGL, so I should be able to work it out. SWN is fairly rules lite so it shouldn't be too hard to extrapolate some conversions.
I intend to start posting here again semi-regularly, I had migrated to G+ but that is soon to be no more, so back to the blog it is. I am on MeWe, but I like having stuff available on my blog for others to view, so blogging it is.