The kids aren't home, my paper has been submitted, my honey-do list is complete (for now), that means it is time for CAMPAIGN DEVELOPMENT! 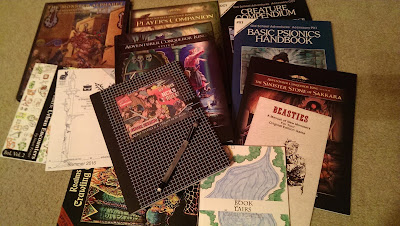 After months of going back and forth as to which Fantasy RPG System I wanted to run, I find myself back in the OSR, and sitting down comfortably to work on and hopefully run a Campaign using the Adventurer Conqueror King System (ACKS).  There are a ton of awesome Fantasy RPG's out there, my bookshelves are full of them, which was part of my issue, I kept chasing after that perfect system. Oftentimes to the detriment of my creativity and my players. The key thing I like about ACKS is that at it's core it is B/X D&D. The edition I grew up with and have arguably played the most over the years, yet ACKS has some fun new features and rules tweaks that allows players to customize their characters without me finding myself overwhelmed trying to keep up with all the different fiddly bits (like I experienced with Pathfinder). Given my hectic schedule this system really looks like it will meet my current gaming needs. While I haven't decided 100% on the campaign setting, I am leaning towards going with the official ACKS Campaign, set in and around the Auran Empire. The late Roman Empire feel to the setting seems like a refreshing break from the straight Tolkien Fantasy gaming that I grew up with, while keeping some of those elements familiar to D&D gamers (i.e. Dwarves and Elves).  Of course with all the cool stuff on my gaming shelves, I will be working in other material from my gaming library to use in my ACKS Campaign. Pictured above are a few of the books I'm planning on using. I've always liked Labyrinth Lord's Realms of Crawling Chaos, while I don't intend to go full-blown Cthulhu, this book is a great resource for Chaos elements to pull into my games. I'd also like to have some psionics in my game, not in a heavy handed way but having some out there, to make the game a bit more unusual and unique from things I have done in the past. And what campaign would be complete without monsters, but with ACKS even the traditional humanoid races have an interesting twist about them, so I'll be using my copy of the Monster Alphabet to put unusual spins on the monsters in the campaign. Well, that's all for now, I need to quit typing about the campaign and start working on it!  Have a great week and Good Gaming!
Posted by Brutorz Bill at 8:42 PM